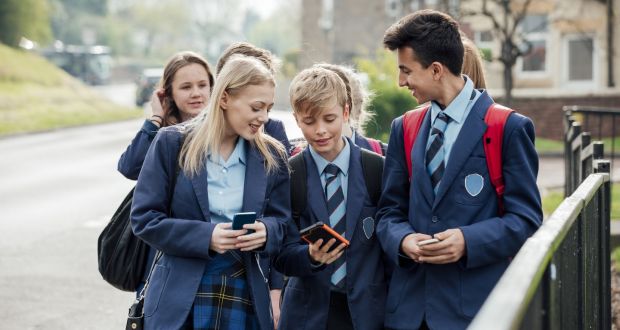 ‘I saw one child with her head in her phone who was nearly hit by a car. It was a near miss.’ Photograph: iStock

A few months ago, students at St Brogan’s College in the west Cork town of Bandon participated in a survey on their use of digital media and its effect on their sleep patterns.

The idea for the study, which was carried out by the school’s student council in conjunction with staff members shortly before Christmas, came about after teachers voiced concerns about the tiredness and poor concentration they were witnessing in class.

“Following discussions with students, we learned that some students were staying up gaming or on social media late at night,” recalls school principal Helen Cadogan.

The results of the study, which came out in January, were of concern – the survey showed that 100 per cent of Leaving Cert students surveyed took their phones to bed and 50 per cent repeatedly woke up during the night to check their social media.

Students who had engaged with the awareness week and had put their mobile phones away by 10pm at night reported better sleep.

“The findings had shown that a significant portion of students were taking mobile phones to bed and were up very late at night communicating with each other on social media – and this was causing tiredness and poor concentration in school,” Cadogan explains, adding that in response, the school ran a tech awareness week called Brogans Sleeps. “The idea was to pick a week in early March for an awareness campaign. As part of the initiative, participating students agreed not to use technology after 10pm until the following morning. This included everything – from games consoles to tablets, computers and phones, which were to be kept in a separate room from 10pm every night.”

Parents were encouraged to provide traditional alarm clocks or to commit to waking their offspring up, as many pupils revealed they were using their phones as alarms.

“A follow-up survey found that those students who had engaged with the awareness week and had put their mobile phones away by 10pm at night reported better sleep.”

Not surprisingly, school policy around the use of phones at St Brogan’s is firm. “Our policy is always that phones must be off and out of sight in school except at the request of the teacher,” says Cadogan.

The school acknowledges, however, that mobile phones can be useful in teaching and learning in the classroom and that teachers in the school occasionally encourage pupils to use their phones in class for specific purposes.

A minor element of this, she explains, involves children using phones in the classroom during, for example, a woodwork class where they are learning how to make a joint.

“This can be filmed, and a link sent to the children so they can play it again and use it for example to revise. Mobile phones can be of some use in the classroom so our policy is basically that they must be turned off and out of sight in school unless requested by a teacher.”

The school’s 600 or so students all have a school email address on which teachers will occasionally send information which can be accessed via phones as, Cadogan points out, “not every student will have a laptop or tablet at home”.

“As well as being a nuisance in terms of social media, phones are mini-computers and have their uses, but in the educational context, it must be a controlled use. We want to encourage sensible use. Our wellness programme in the school focuses very much on safe and acceptable use of digital devices.”

Phones are now completely banned from the campus of the Ursuline Secondary School in Thurles, says principal Mary Butler – and while not all students welcome the new policy, introduced in September 2018, the policy, she believes, has been a resounding success in terms of improved face-to-face social interaction between students.

“Last September, we introduced a policy following consultation with parents, staff and school management to ban phones completely from our campus. The support for the policy was an overwhelming 82 per cent,” Butler says, adding that students are now not even allowed to have them in their bags or lockers.

“We had always had a ban on them in classroom – all phones had to be kept in the lockers.”

However, recalls Butler, one evening about 4pm, just as school was closing, she was sitting in her office and looking out the window saw students leaving the school grounds, all, she recalls, with “their heads in their phones”.

“There is a roundabout near the school, it’s a busy area and cars are coming and going. I saw one child with her head in her phone who was nearly hit by a car. It was a near miss and that decided me.

“Every school in the country has issues with students’ phones. However, a lot of children are also on their phones at night and we make appeals to parents around the fact that bedrooms are for sleeping.

“Some parents are terrific. Others are careless and some students are awake all night. There are all sort of issues in relation to phones, from bullying to the fact that a simple disagreement between two children is escalated because it goes online. And furthermore, if their phones are on all night they are disturbing others as well.

“We were not happy with phones in the school. We reckoned that students are on the phone plenty of time outside school.”

Not everyone’s happy about it, says Butler, “because they want to be on their phone 24/7”.

However, since the rules have been imposed, she says, staff have noticed that student-to-student communication on the corridors and in social areas is much better in the mornings and again in the evenings, when students leave the premises:

“They’re chatting to each other and communicating,” she says.

“It’s hard to measure, but we find the place has a happier atmosphere for everyone.”

Any child who has a family emergency can bring their phone to school as long as they are prepared to hand it into the office and check it during the day.

Students are, however, allowed to bring their phones on school trips which last out of hours.

“They can bring in their phone, hand it in to the office and collect it on the way out to the bus. It’s reasonable stuff, we’re not running a military operation here but it’s now a phone-free campus.”

Everything is dependent on the compliance of students and their parents and it can be hard to be certain that there has been 100 per cent compliance, Butler acknowledges.

“Last year, we banned phones up to Junior Cert. This means they cannot use their phone at any time during school hours.

“We did have a number of transgressions, but generally it has worked well,” he says, adding that one of the drivers for this policy was to bring about a return to traditional student sociability.

“They’re not standing around isolated and cocooned and looking at their phone, and there’s no videoing going on at break time.”

In fact, Leen says, students are back to having real-time conversations with one another “rather than being on their phones all of break time, which is the way it was up to last year. It’s not like that anymore.”

However, he says, when it comes to transition year, which 80 of the school’s 400 or so students opt to take, the situation changes.

“We find it is not possible to implement the ban on phones completely because the students spend so much time away from the school in terms of trips or work experience.

“Then, by the time they get to fifth year, they’re turning 18 and they’re adults.”

At that point, Leen says, phones are simply banned from the classroom – the rule is they must be powered off and left in the students’ lockers.

“If a student is caught using their phone, it’s confiscated by the teacher.

“When you set a rule you have to implement it, so if a student is seen using a phone and it is their first infringement, the phone is confiscated and placed in my office for the student to collect on their way home.”

“These sanctions were decided by the student council and supported by parents and staff,” says Leen.